“I was raised to believe we all have a civic duty and a responsibility as Americans to improve our neighborhoods and our nation.” – Paul Cook

What if you never saw another political television ad again? There is probably a joy running through your heart right now at just the thought. What if you had just as much of a chance to serve the political institutions of this country and represent the community you live in as any politician currently “representing” you? Political representation truly for the people, by the people, but perhaps not selected by the people. It maybe unsettling or it maybe just what Democracy needs to save itself from what appears to be on the verge an unadulterated and uanpologetic plutocracy.

From the years 1998-2018, the United States will have spent an estimated $44 billion (see below) in electing its congress and presidents – bear in mind this is just what is spent on elections at the federal level. The cost of the presidential election has increased over 85 percent and congressional election cost have increased a blistering 169 percent. Meanwhile, average hourly earnings of all employees has increased by only 30 percent in the same period. There is no doubt that our sibling site, HBCU Money can attest, that this makes little economic sense for a country that is in the grasp of globalization and automation. Capital that needs to be direly used elsewhere is being siphoned by the political industrial complex to maintain a firm grip on their institutional power by both Democrats and Republicans alike. Politics is more big business than population representation – and that business is booming as the aforementioned numbers point out. 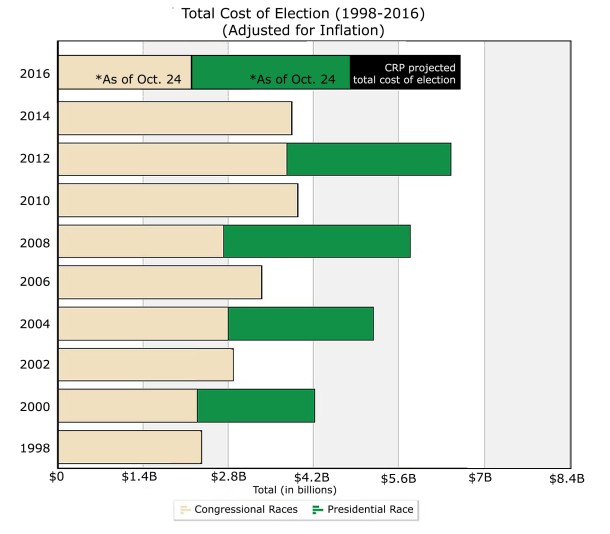 Yet, an examination of politics from local to national level is almost never reflective of the populations they are meant to serve. In the 114th Congress for instance, the House and Senate were 80 percent male, but we live in a country that is 50/50 among gender lines. The racial composition was 80 and 94 percent white in the House and Senate, respectively with other races being nowhere near their population representation. Then, there is the class issue, according to Time Magazine and the Center for Responsive Politics in 2012, “more than half (of members of Congress) had an average net worth of $1 million or more: 268 to be exact, up from 257 the year earlier” versus only 3.3 percent of the overall U.S. population. Lastly, there are the issues of geographic, education, and occupational representation. As you may have guessed, very little representation exist for rural, less educated, and diverse occupations within our governments. We have few teachers, tradesman, or scientists in the halls of Congress, yet these are the people who are creating the policy of America’s educational and occupational future for everyone and are doing so from an extremely narrow and homogeneous perch.

So how do we create an alternative to the “election” process that fails to represent the interest and demographics of the country? Stop having elections and start having legislative duty, in other words jury duty for politics. It may sound far reaching, but it maybe the only way to ensure that everyone is engaged in the legislating of a country and not just an elite aristocracy of homogeneous ethnic, educated, and class sect of the population. Findlaw.com explains just how someone is selected for jury duty, “Jury selection happens in two parts. The first part is, essentially, random selection. The state or federal district will randomly pull names off of lists that the state keeps in the regular course of business. These lists could include a list of registered voters, a list of people who hold driver’s licenses, or a list of people receiving unemployment benefits.” Juror pools have become increasingly more reflective of a population from which they are chosen. Are they perfect? No, but are there still all white male jurors today in places where there are obvious other groups present, for the most part no. What would stop us from doing this with our politics from the local level, state senate, and all the way up to congress and senators. Perhaps we still elect a mayor, governor, and president, but the dynamics by which they would preside would be forever altered since they would have no party to back their agenda. They would have to actually convince those serving at the time that their policies are good for their respective city, state, or the entire country.

There will be immense opposition by this from both Democrats and Republicans at all levels from local to state up to federal because it upsets the very essence of the political industrial complex. And do not expect media companies that own televisions stations that air those political ads like Disney or Fox to be on board with such an idea either, after all they are the primary beneficiaries of that $44 billion that is spent. The Cook Political Report notes that most recently, “In 2014, the most recent midterm election, the total TV ad spent was $2.8 billion.” They also believe that spending in the 2018 midterms could reach well in excess of $3 billion. The very notion that we could exist in a country the influence of the political parties would be lessened would be unsettling to many. That those (s)elected may still represent a party ideology is certainly true, but would probably be more inclined to go in and vote what they believe is in the best interest of the community/country beyond the comfort zone versus those who while they hate the status quo are married to the Stockholm Syndrome comfort that those very parties and their politicians provide. Instead of parties spending years lobbying to gerrymander areas, those assigned to govern would actually do their assigned civic duty.

Having elected officials may seem more democratic to many, but when the process has been bastardized in such a way that those “elected” do not actually represent the demographics of the country, then the power of democracy has been siphoned into the hands of an extreme few who are the political class and funded by special interest on both the Left and Right of the political spectrum. If the United States Congress is truly to be a voice of the people, then it must be reflective of the people. Exactly how we arrive at that selection, election, or determination should be fluid and adaptable.